Stages Version 7.7 is the first of a series of releases delivering smaller feature sets at a faster pace. Customers will be able to quickly benefit from new capabilities instead of having to wait for larger releases.

Starting with version 7.7, we plan to increase the Stages release frequency and issue a new release every 3-4 months. As a consequence, previous releases will drop out of maintenance earlier than before.

We are aware that not all our customers want or are able to upgrade their system every few months. For those customers, we will keep Stages version 7.6 under Long Term Support (LTS). An LTS release will be maintained for at least two years until a new LTS release will replace it.

If you want to upgrade your system less frequently, we suggest to stay on version 7.6 and benefit from its Long Term Support.

Especially in large process landscapes, some associations lists can become longer. For example, a project or program manager role might have over hundred responsible activities in a product development process.

Stages 7.7 adds the capability to group association lists by workflow, role, phase, or other elements. Each association group can be individually opened and closed by the user. Elements that are not associated with a grouping element are positioned in a “Other” group.

Element associations are always displayed in the order of the associated elements. Stages 7.7 adds the capability to sort specific association lists without having to change their global order.

To reset the sort order to the global setting and remove any local sorting, the “Default” sort order can be selected.

With version 7.7, an interface that is identical to many other instances, is now only shown once. This improves the visualization of large process landscapes with many process instances.

Before version 7.7, interfaces were shown between process versions with the same name. This capability has been removed.

Some process changes should be made effective at a specific date, e.g. at the first day of a month. With Stages 7.7, the release automations can be configured so reviewers and/or approvers can set a specific date and time when the process will be released and marked as valid.

In each manual automation step, the “Process release date can be scheduled” switch enabled this capability.

When the automation is being executed, the respective participants can then either select the date and time when the release should take place or select “After automation has finished” to immediately release the process.

Value Streams are available by Default

Value streams are a method to manage cross-functional and cross-organizational activities and provide macro views of a process landscape.

The value stream mapping capabilities that have been introduced in previous Stages releases are now available in each installation. To enable modeling value streams, select the “Unified Configuration (Value Streams)” metamodel under Management > Settings.

If you have a customized metamodel version, please contact your respective product consultants for more info.

As the report shows both the coverage and the number of mappings for a particular standard requirement, it is also useful to detect mappings that have been created, but not rated for a specific coverage yet.

If you are upgrading from a previous version, you can download the report here.

We added the capability to create feedback in Intland's Codebeamer issue tracker.

With version 7.7, script attribute mapping has been added to the feedback configuration. You can aggregate values out of the process via a script and map the values to your feedback system. More information can be found here. 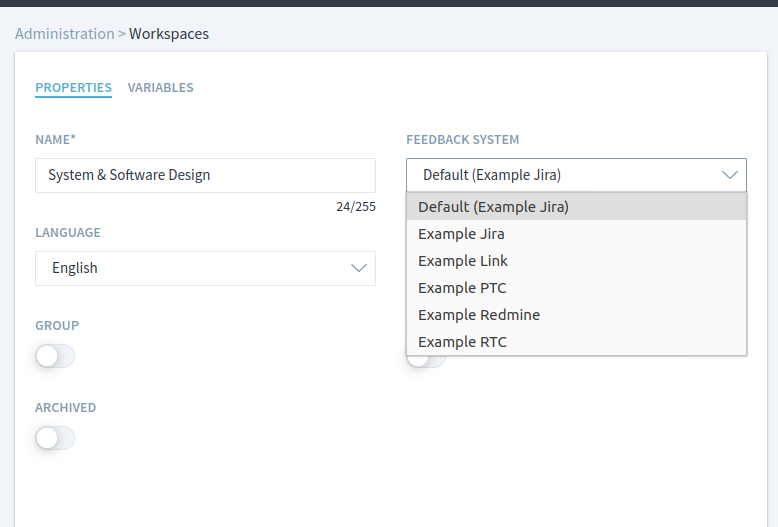 The first feedback system in the config.xml is the default.

If you upgrade from Stage 7.6 or previous versions, you have to migrate your config.xml:

We added the new feedback system link. A stages user who wants to give feedback will be directed to a issue collector page of the specific feedback system. The user will see a form with some fields filled out beforehand by Stages.

Support for Subversion (SVN) up to Version 1.14

Subversion (SVN) versions up to 1.14 can now be used as document repositories.

End of Life for CMMI in Stages

CMMI (Capability Maturity Model Integration) has been one of the first quality models for software development. For over 30 years, numerous organizations matured their software development practices with the help of CMMI and many other standards and quality models have been inspired by it. Starting with CMMI V1.2, the standard has been available as a reference model in Stages, culminating with the release of CMMI V2.0 a few years ago.

In recent years, the relevance of CMMI in the industry has diminished and other standards like Automotive SPICE have taken its place. Therefore, we have decided to not support CMMI model versions beyond the current version 2.0. CMMI V2.0 will be the last version available as a reference model for Stages. Consequently, the CMMI reference model will be excluded from future maintenance contracts.

Method Park has been a proud supporter of CMMI for over 15 years and we thank everyone in the CMMI community for their inspiration, contributions, and support.

How to Upgrade to Version 7.7

Please contact our customer care team to request the installer downloads if you run Stages on-premise or request an upgrade of your managed Stages Cloud instance. Alternatively, you can talk to your dedicated product consultant for more info.

For topics marked with *: please contact your product consultant for more info on how to integrate those enhancements into your configuration.